After a restful night, we were ready to embark upon our first of two tours. There were more available but we wanted to be able to spend some unscripted time while in Cuba.

Johanna was our guide to Habana Vieja.

Along the way, we encountered the Giganterìa – street performers on stilts. 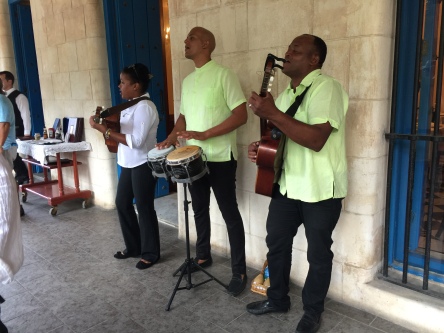 These musicians were playing as we got off the bus at Plaza de Armas. 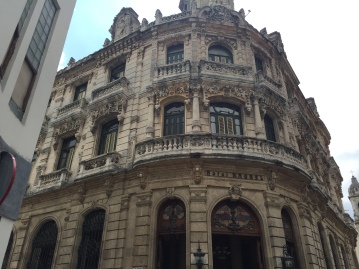 Example of some beautiful architecture.

Although Cuba is a socialist country, the government has been encouraging some capitalism at the small business level. One example of this is a paladar or paladares (plural). It is an independent private or family run restaurant. We ate at many and they were very good.

We asked our guide, Johanna, for a recommendation while in Old Havana and she suggested “La Moneda Cubana”.

Cuba is an international city – lots of tourists everywhere. The menu reflects such.

TC’s bucket list included enjoying an authentic Cuban churro. Even Miriam concluded this was the best churro she had ever eaten. I had to agree. It was awesome. Who knew churros could be so good?

Here is a short little video with the sights and sounds of the city.

We drove down to Key West on a Wednesday and spent the night on the boat. On Thursday, we picked up final provisions in preparation for a sail time of 3:00pm. It was estimated that this sail would take approximately 20 hours. The boats were released in three different waves.

The boat was very comfortable with two staterooms (and two heads). The two heads would come in handy as the evening wore on.

Although, we all took some kind of anti-nausea drug – half our crew (2 mates) became incapacitated as the sun went down and night fell upon us. Thankfully, the Captain was ship shape as was yours truly. The ride was a bit bumpy but not crazy. The winds were S-SE at about 23 knots. The seas were about 6ft. So, we had the wind at our back and that was a good thing. Unfortunately, at about 10pm Thursday evening we lost the autopilot. It seems the stern got pushed around a bit with the mizzen up and put enough strain on auto that an aluminum plate that the gears were attached to broke at the solder lines and fell into the bilge. So, that meant manual sailing the rest of the way. Later that night or early morning the console GPS went kaput. Then the handheld GPS battery died. We did have other backups but since there were so many boats going our way we just followed the stern lights of another boat until dawn. Captain Tom handled most of the steerage duty – but did hand-off to yours truly for an occasional break.

With two mates out of commission our two-hour watches fell to the wayside. Did I tell you it was a long, long night?

There was nothing quite like seeing Cuba on the horizon. From this point it would still take about 3 hours to get to the marina harbor. What a sight, though.

There are communication protocols that you follow when requesting entry to the marina. The Cuban authorities had small spotter boats out to liaison with customs and the sailboats so we would know when we could enter the marina.  Our first stop was the customs dock where a number of authorities would come aboard to check our passports, inspect the boat, take our temperatures, ask questions, etc. Once that process was complete, we were assigned our spot in one of the marina canals.

We had finally arrived! I think we all slept pretty well that night. 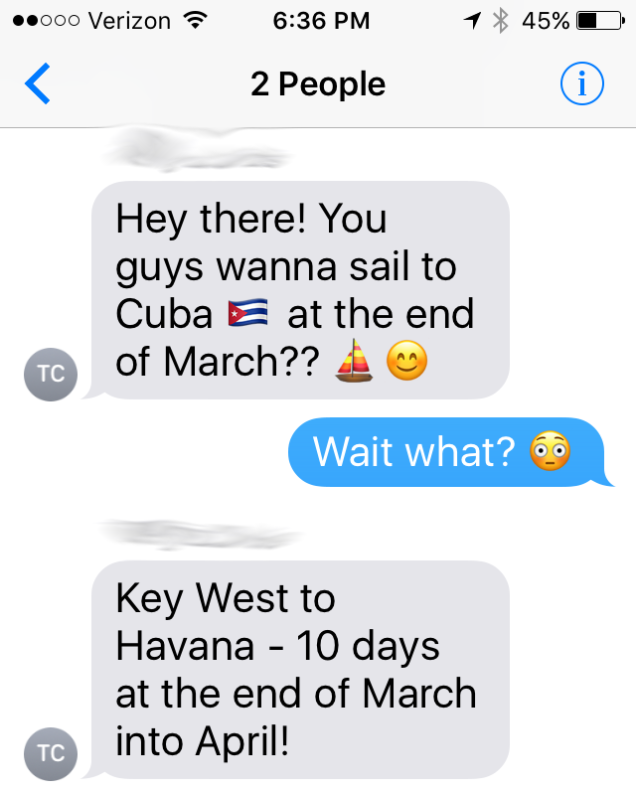 The mad scramble began! First of all, we had to check with pet sitter – if pet sitter was not available then all was kaput. Pet sitter responded immediately – yes, available! Next, work time off. Lisa had been on the job less than a year but boss said that if you’ve got the time then you can take it. She had the time accrued! Passports! Got passports through UF passport office – highly recommend them – use them instead of Post Office. Paid extra to get them expedited. DHS was on top of things – got them quickly.

This was actually a Rally Cruise put on by Cruising World and Harmony Yacht Vacations:

Experience CUBA both from land and sea! Be part of history when 50+ vessels sail to the amazing Cuban port of Marina Hemingway.  The experience just gets started with unique people-to-people tours and projects to give you the opportunity to experience the famed city of Havana and the amazing countryside with optional tours to Vinales to see an actual working tobacco farm!  Also included is a “Parade of Vessels” along the Malecon and El Morro Castle led by none other than Commodore Escrich of the famed Hemingway Yacht Club!

We knew it to be the chance of a lifetime and could not pass it up!

Stay tuned for more about our trip!

So excited! Cuba here we come! We’re setting sail on Andiamo at the end of the month. Viva Cuba!