Tomorrow I go to get the bandage and stitches removed from my injury site. I’m looking forward to it being over with. I know that I will need months, maybe a year, before sensation returns to normal (if it ever does). My guitar sits in a corner forlorn and neglected. Miriam said the sweetest thing to me the other day, “I miss you playing.” I’ve found a finger pick that may allow me to play classical again. Soon, I hope, soon.

The UF women’s basketball team is playing so well this year. Thursday they play Alabama at Alabama. Then they come home Sunday to play Tennessee. ESPN2 is going to carry the game nationally – hey fans, game starts at 5pm, but doors open at 3:30pm. We’ll be there when the doors open. There will be special reserved seating for BCC members – and remember to stand for the first four minutes. Go Gators!

I’m one of those State Farm casualties. Have had both home and car with State Farm for about 18 years. They’ve never paid a claim on my behalf. And now, they’re ditching me. Nat, correct me if I’m wrong, but I thought the whole concept of insurance was to spread the risk. And yet, it appears that State Farm, along with a bunch of other companies, has actually concentrated the risk by creating a separate Florida company. Anyway, I’m am starting to look around – both lines of business will be moved – State Farm will lose my car, as well. Bastards. It’s my blog – I can say this. Apologies to the children 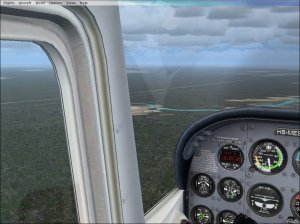 And now to top it all off, Microsoft has fired the Flight Simulator developers! What is the world coming to?

2 thoughts on “This and That”